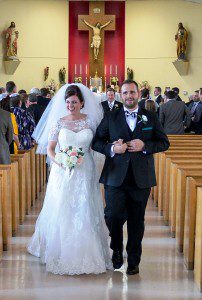 The Sacrament of Holy Matrimony was made by Jesus Christ to make holy the lawful union of a Christian man and a Christian woman. Marriage is a divine institution because it comes from God Himself in the creation of Adam and Eve. God made marriage for the bringing of children into the world and raising them and for the mutual help of husband and wife. Jesus Christ raised marriage to the dignity of a Sacrament. It unites a man and a woman in an indissoluble (unbreakable) union until death; it makes Sanctifying Grace grow in their souls; it gives them special helps to perform their duties as married people and to overcome the difficulties that may come into married life. Only in the presence of a Catholic priest and two witnesses can a Catholic be validly married. Only in certain occasions can a Catholic receive permission to marry outside of the Church, but it must be for a sufficiently grave reason. If a Catholic is not married by a priest then a couple in this situation has to separate or have their marriage made valid by the Church. A Catholic who is married by a Protestant minister without special permission from the Church is not validly married. For a marriage to be valid the following are necessary: A single man and a single woman; appropriate age; free to marry (no previous marriages unless a decree of nullity has been issued if there is a previous bond); capable of sexual intercourse; intend to be faithful to each other until the death of one of them; intend to have children; and are in no other way prohibited by the law of God to marry.